If you still have questions or prefer to get help directly from an agent, please submit a request. We’ll get back to you as soon as possible.

AppColl provides activity log reports called 'Account Activity". These reports, which are broken down as date ranges, can be found in the Reports module under the report drop down. These reports show a line-by-line breakdown of everything that occurs in an account where a change is made. For example, modifying a matter would be shown. However, someone browsing certain pages would not be shown since this does not change anything. 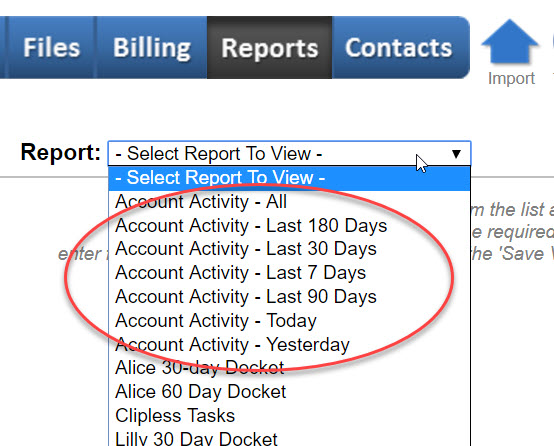 These reports have a number of columns called: ID, Created, Who, Matter, Description and Why. The ID column simply displays a unique number for each row. The 'Created' column shows the date and time (including seconds) each item occurred. Looking at the seconds can be very useful when numerous items were added within a single minute and you're not sure which ones were created first. The Who column shows which person was responsible for items being added to the log. Many times AppColl System will be shown in the Who column, which means that AppColl did certain things behind the scenes. For example, a person may have imported an XML file, however, AppColl may have done much of the behind-the-scenes additions. The Matter column shows which matter was affected by any changes. For example, a matter would be listed if tasks were added to the matter or a filing date changed. However, creating an invoice would be matter independent, so none of the activity line items would list a matter.

The Description column shows what actually happened in the account. While the syntax may appear complex, it provides a great deal of information. You can easily see when a report was created, when a matter was changed, when a task or billing item was added. For example, if you want to know which reports have been mailed to someone over the past 90 days, you can filter for it using the below criteria.

If you want to know who deleted or closed a task, you can filter for matter and optionally look for keywords in the description such as 'deleted' or 'changed'.

It can be useful to see how a specific matter was added and changed along the way. Filtering for the matter name will show all the details.

Beginning on July 30, 2017 AppColl began tracking and displaying enhanced activity log reporting by including a new Why column for each row of data. The Why column describes how something was added, edited or deleted. For example, if a task is added to a matter, the Why column could display that the task was manually added, created from another task being created or closed, or created from a date field in the matter being changed or added.

The primary events that populate the Why column include:

Manual Changes by an Individual User

The following items were manually input as shown below. Manually input items include adding, editing or deleting: tasks, matters, billing items, invoices, prior art, IDSes, contacts and files to name a few.

When an XML file for a matter is imported, the primary additions are listed in the Why column as 'Manually Updated from USPTO Pair XML File' along with the specific name of the file. This includes adding or updating matters, adding inventors, adding priority connections and adding USPTO tasks, to name a few.

Please Note: Receive tasks, such as Receive Notice of Allowance, Receive Final Office Actions, etc., don't show the Why column as an XML file. But rather show as a Pair Transactions that was imported containing the specific UPSTO document code. For example, the Why column of a 'Receive Notice of Allowance' task shows 'PAIR transaction imported that contains specific text 'noa'.

The Why column of items added or edited from a CSV file will show as 'Imported from file [filename],csv'. This includes matters, contacts, tasks, billing items, prior art references, etc. The Who column also shows who did the actual import.

Any time a US Trademark is added or updated from TSDR, the Why column will display 'Manually updated from USPTO TSDR database' for all items related to populating or changing the bibliographic information or adding USPTO: tasks. Auto-generating of other tasks will state what triggered them to be created (i.e., filing date changed, allowance date changed, etc.).

Other tasks being created, closed or missed

Changes to matter dates can also trigger task creation. For example, in the below screenshot, these four tasks were generated because the matter's filing date changed.